Posted by niall connolly at 10:12 No comments: 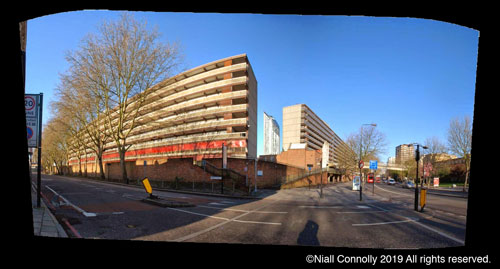 More recently I have been making images of the Heygate Estate (see Elephant & Castle and the Heygate button above) which is being demolished as I write this. In its latter years, the Heygate had a bad reputation and there was an enthusiasm for its demolition and replacement with something more in keeping with Southwark's view of itself in the new millennium.

In the 1970s, the Heygate, and the nearby Aylesbury Estates were envisaged as places to house a broad cross section of the community. There were integrated shop units, laundries, public spaces and walkways in the sky, all of which should, in an ideal world, have created an ideal place to live.

But something went wrong and the Heygate Estate gradually attracted a reputation every bit as grey and grim as its concrete exterior. It may have been the effect of Prince Charles' views about what contemporary architecture should be but, for whatever reason, as Southwark entered the new millennium, Southwark Council expressed a determination to erase the Heygate Estate and the demolition started in late 2012 and will probably be finished by late 2013.

It is unclear what will replace the Heygate but what is known is that it will be mainly private rather than public or social housing and only time will tell if that model will be any more successful.

It might be that, at some future time, we will look back and find that we miss the Heygate, its concrete brutalism and its walkways in the sky. Given that most people's memories are relatively short, I hope that these images will remind Londoners and visitors of what was there before and, at some future time, it may be possible to assess whether or not the Heygate was any better or any worse than its replacement.
Posted by niall connolly at 00:27 1 comment:

A gap in Leathermarket St - surely not.

Bellway Homes were partly responsible for the re-invention of Bermondsey Street through their redevelopment of what was the British Telecom depot on Leathermarket Street. The development, designed by architects CZWG, was heavily advertised in the Evening Standard with illustrations showing a couple, in evening dress, dancing the night away.  Wishful thinking for Bermondsey in the early 1990s! However, the advertising raised Bermondsey's profile and marked the start of the mainstream development of Bermondsey. Today, the phrase 'a gap in Leathermarket St' would raise howls of protest about multi-nationals paying no tax but 'back in the day' there were other types of 'gap' in Leathermarket St.

From memory, the Bellway development was originally intended to carry on to the south, through to Long Lane. The owner of the adjacent industrial site (was the company called Dairymaid?) would not sell so the resultant Bellway scheme was rather more limited than the original vision.

In the Printers Yard

Standing on the terrace of Block K quite recently, I wished that I had thought to make more panoramas of Bermondsey 'back in the day'. This panorama, looking generally west from Block K, would have looked dramatically different were you able to see the same view in, say, 1998. Large chunks of what is visible today simply didn't exist even 10 years ago.

The only two 'original' buildings in this view are on the extreme edges of the image. On the far left there is McNeill's warehouse with the white glazed brickwork and, on the far right, the lower (original) part of the building was the home of Sangorski&Sutcliffe and Zaehnsdorf, one of Britain's foremost bookbinders.
Posted by niall connolly at 04:46 No comments:

Originally a cheque clearing operation for one of the major banks, Blue Lion Court was bought by one of the 'new wave' developers in the mid 1990s. Terry Pomroy of Callington Estates was one of the earliest developers to come into Bermondsey and look to use the live/work approach to move otherwise empty buildings into development. Callington's first building was Gemini House where the initial application was rejected by the planners and then rejigged around live/work to gain planning approval.

The panorama below was made standing on the fire escape on the north elevation of Blue Lion Court. At the time of making the panorama, none of the major developments had taken place. The Rankins building is in the process of being redeveloped as is the Guidelines Stores building but the GIFCO building is unchanged as is Bickel's Yard. In the foreground of the panorama is the RECALL building, now occupied by the White Cube Gallery.

Posted by niall connolly at 18:15 No comments:

The Denyer Associates drawings focussed on the Bermondsey Street Conservation Area as it was in 1979. That CA was focussed on the elevations of Bermondsey St and parts of Druid St, Whites Grounds, Tanner St, Morocco St, Tyers Gate, Lamb Walk and Grange Walk. The drawings produced by Denyer reflected the limits of the CA at that time and, as a result, leave chunks of those streets unrecorded.

In this way, Tanner St is recorded on the north side as far as Hatchers haulage yard and then there is a gap where Tanner House stands and then the drawings record the Turtle & Pearce building, leaving the elevations of Sarson's Vinegar Factory unrecorded.

This composite drawing shows Tanner St from the junction with Bermondsey St to Hatchers yard.


To illustrate the possible connection between 3, 5 & 7 Tanner St and the design of Telford's viaducts, the image below shows the front elevation as it would have been had 5 & 7 not been refurbished in the early 1960s. Had the building been left alone, it would probably be worthy of listing today but at least one element, 3 Tanner St, retains the original features.

Posted by niall connolly at 06:47 No comments:

The Denyer Associates study of 1979 generated a set of drawings of the Bermondsey St elevations at 1:50 scale. These drawings offer an accurate snap-shot of the street at that time and, in this instance, show the original street facade at 39/45 Bermondsey St, burned down in 1986.


This composite image (two panels of the Denyer drawings) shows Globe House on the left, 39/45 left centre, The Stage and then Tempo Leatherworks (now the Shiva building).

The Denyer drawings didn't include the upper floors of The Stage building so I have added a section from 39/45 (in black and white) to show the roofline of this part of Bermondsey St.
Posted by niall connolly at 04:07 No comments:

Unless stated otherwise, all images presented here are the copyright of Niall Connolly. Reuse in any form without the prior consent of the author is expressly forbidden.